Mount High Feeling flowers - hello friend, welcome to our blog Ways To Maximise Space this time we will discuss what you are looking for information that is on Mount High Feeling flowers We've collected a lot of data to make this article so that what we show complete enough for you, ranging from information design house that long until the latest, well please continue reading:

You can also see our article on:

Do  you agree with Ralph Waldo Emerson that the earth laughs in flowers? I do.  Flowers are such an integral part of my existence; I could not imagine a world without them.  There are certain times of the year that I think about flowers more than others, and spring (so called, little evidence yet) in Newfoundland is one of those times. As I look out at a light dusting of snow today (yes, snow), I am happy I have beautiful tulips on my coffee table.


I can't get enough fresh flowers in my house, but my budget doesn't allow frequent trips to the florist resulting in long gaps between vibrant colour.  No deals in this city when it comes to flowers!  I constantly joke that if I won a million dollars I would have fresh flowers in every room of my house every day.   Yep, that would be the first change I would make. Not a very exciting option according to friends, but it would make me happy.

Flowers also move me to paint.  I  go through cycles of painting florals and gardens, and several weeks ago when  I was  in total despair about the weather I went downstairs and painted a fantasy bouquet.  I had no reference, these are not identifiable flowers; they are a hybrid I dreamed up to represent the many flowers I like.

This work is a joyful  expression of my love for flowers. Painting helps me to bridge the seasonal gap between winter and spring while I wait for nature to turn green and colourful. Sometimes my work is the exact opposite of Feeling Flowers.  It can be close up, calculated, detailed - an invitation to the viewer to take a closer look at the world of plants.

But all the paintings come from my deep love of flowers, a love born early as I lay face down in the meadow and smelled the buttercups.

Red poppies are favourites because they are so brilliant and fragile. I am attracted to them in all their guises: in a garden, painted or as design motifs on household items. 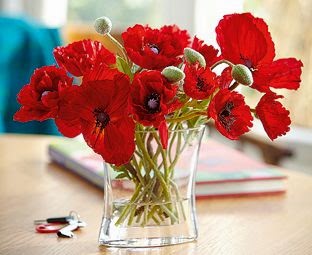 I don't even mind a good fake poppy as an accent in decor.

Where did all this poppy design love come from?

Well, it started a long time ago with the first  Marimekko's poppy design released in  1964!  I was not very old when  I first saw  Finnish textile designer,Maija Isola  iconic unikko design  in a magazine in our local library.  A love affair began.

And now 50 years later, I am thinking about this same design for a duvet cover in my guest room. 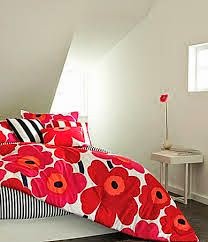 In many ways 2014 is the year of the poppy because I just received two metres of Marimekko fabric from my daughter . Then my sister got in on the act and made me 12 dinner napkins from the fabric. A family affair for sure. 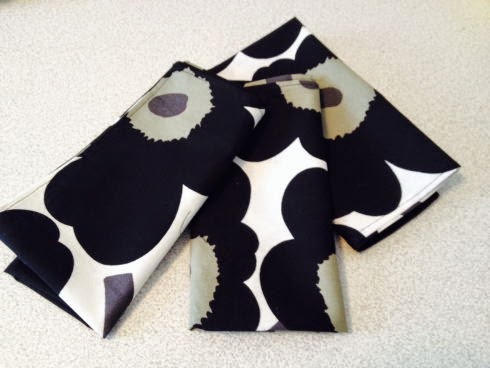 From tulips in the flesh,  fantasy flowers, poppies and wherever your heart desires if you feel flowers.
I will end as I began, with a quote from Ralph Waldo Emerson...
" Flowers.... are a proud assertion that a ray of beauty out values all the utilities of the world".
Sometimes you get to combine both !
Happy Mother's Day 2014.

finished already articles that discuss Mount High Feeling flowers there can bookmark or share clicking the link https://walkinonsunshine247.blogspot.com/2014/05/mount-high-feeling-flowers.html if it was helpful for you, hopefully in the article gives a broad insight about the design of the house.